At the Mondial des Vins Extrêmes only wines from vineyards grown on steep slopes and terraces over 500 metres above sea level or remote islands may participate.  These are territories where most of the work is done by hand, which is also why the terroir is so intensely expressed. Although such winegrowing regions, including Brda, represent only 0.5% of the 3.5 million hectares of European vineyards, the wines they give have a sensory profile clearly indicating their origin and are exceptional in this sense.

Growing grape vines on terraces, cut by the determined winegrowers in the typical marly soil of Brda, is a clear example of viticulture from which authentic and unique wines, so much different from the massive production on the flat plains, originate. Klet Brda actively promotes heroic viticulture, including by participating in such competitions that unite producers from “extreme” regions in their efforts to make buyers understand the qualities of sustainable viticulture producing “sincere” wines. 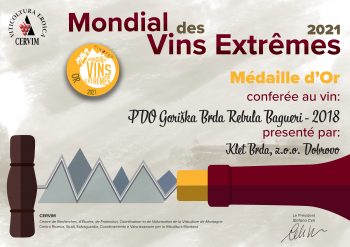 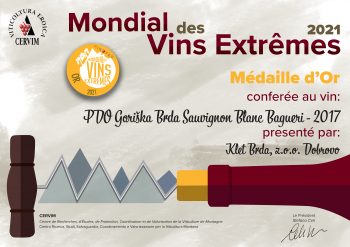